The most recent titleholder to receive a Non-finalist Talent award at Miss America was Miss Utah 2008, Kayla Barclay (Hall), with her piano performance at the 2009 Miss America Competition.

On September 6, Riley wowed the audience with her arrangement of “Praeludium and Allegro.” During the first night of preliminaries, she received the Preliminary Talent award and a $2,000 scholarship. It is the first time Miss Utah has won the preliminary talent since Amanda Moody (Nixon)’s classical piano performance in 1996. 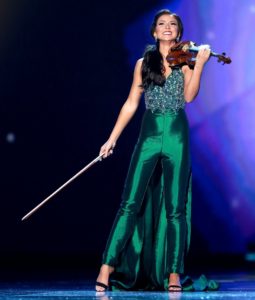 In total, JessiKate Riley earned $6,000 in scholarships from the Miss America Organization. A total of $3,000 for her talent awards and $3,000 for participating in the competition.

According to Christopher Schram, this was the first reward Miss Utah has won at Miss America in five years. Another fun fact to note is that the Miss Utah Organization is now tied with the Miss Massachusetts Organization for Non-finalist Talent awards, with 17 won by each!